News from the fairways of Arcot Hall

Friday 20th November
We’ve had another productive week on the course, The slit tineing of the fairways was completed this week.  All of the greens were verti-drained with 1/2 inch tines to the depth of 11 inches with maximum heave on the machine to achieve maximum disruption to the soil structure beneath.  Below is a diagram showing the benefits of verti-draining and also a picture of what the 18th green looks like once work was completed. 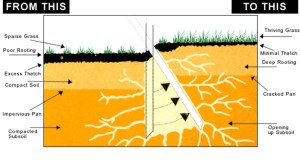 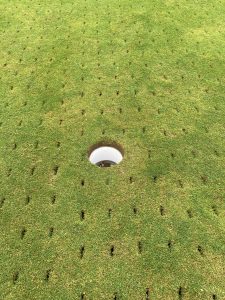 Work has began on the edging of paths, with the path at the 12th being edged, weeded and then topped up with new red track. 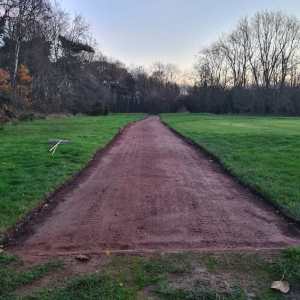 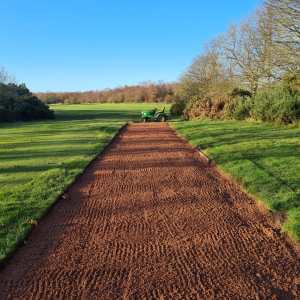 Once this was done work then started on the path running through the 9th hole. 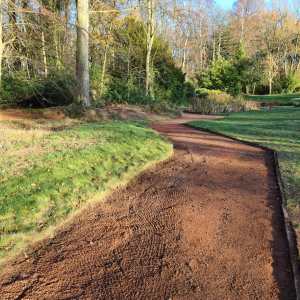 The laurel bushes and other overhanging branches to the left hand side of the 18th green have been cut back to allow us to achieve and maintain a wider area for golfers to pass on that side of the hole.  The area will be dressed out and seeded in due course.  Now this area has been opened up it will allow for more sunlight which will lead to better grass growth and judging by the amount of golf balls found ‘yes one of them was mine from the last time I played’, it should make the shots into the green a little easier. 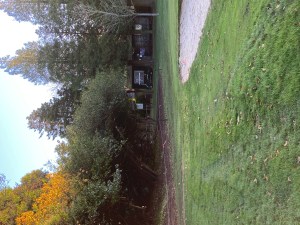 As some of you may have been lucky enough to see before this latest lockdown, work started to trim the gorse bushes and other trees that have grown in the ditch on the 18th.  This is being carried out to make the area more presentable as it has become over grown also tee shots from the main tee have become hard to distinguish where they’ve landed.  It’s also being done so we can bring the old front tee back into play during the winter period.  As you can see from the photos below it already looks a lot better from the front tee.  There is still more work to be done on the larger trees to the right hand side of the pictures, this will be carried out in due course. 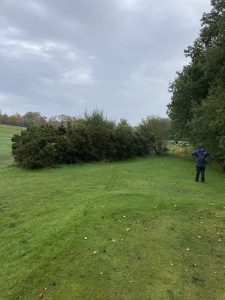 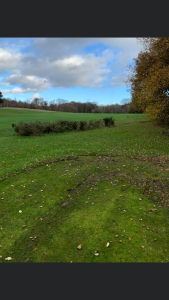 Monday 16th November
After A very wet few weeks the greens staff were able to get back on with the drainage work on the 9th green.  This was completed last week with four full runs from back of the green to the front of the green, a short run on the left hand side to the raised area behind the bunker and a short run behind this area where the water previously sat.  We tapped the new drains into an existing drain which runs into the pond on the left hand side of the hole. 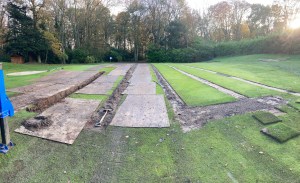 Once the drains were inserted, gravelled and rootzone put In the turf was reinstated. 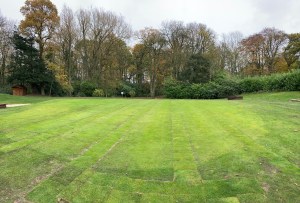 The turf will be allowed to settle before we start the process of rolling the turf so that its ready the bring back into play at the start of the new season.
Other work that was carried out last week was the mowing of the greens and the aprons, due to the milder weather that we’ve had we will be keeping on top of any required mowing in the coming weeks.  We started to cut back the bushes to the left hand side of the 18th green.  The slit tineing of the fairways was started this week, this is to help relieve compaction and allow airflow into the soil to help maintain strong root growth and also help to dry out wetter areas where water may sit for long periods of time. 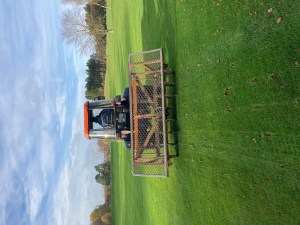 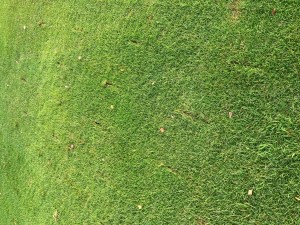 Finally with the seemingly constant falling of leaves we’ve had the tractor mounted blower out on the course to clear areas where the leaves may gather and cause damage to the grass. 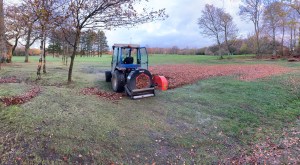 This coming week we are looking to start edging paths, verti drain the greens and continue the pruning back of the bushes to the left hand side of the 18th green.
Week commencing 6th July
Following the strong winds over the weekend there had been some damage to some trees around the course, some large trees had came down on the 1st, 8th, 13th and the 15th holes, these were cut up and removed over the Monday and Tuesday mornings.  Most greens and the 17th fairway required the tractor mounted blower across them to tidy them up on the Monday morning prior to them being mown.  With the the Wilkinson salver 36 hole qualifier for the club championships on Sunday the week was spent cutting all surfaces in preparation.  The fairways were cut on Monday and Tuesday afternoons.  Tees were cut on Tuesday and Friday. Aprons and surrounds were cut on Monday Wednesday and Friday.  The semi rough was cut on Monday Tuesday and Wednesday, with the first cut mown on Thursday, this again was a damp cut meaning the areas were needed to be cleared of grass clippings using the tractor mounted blower.  The fairways were cut again on Friday and were finished ofF on Saturday morning.  Over the weekend the greens were cut on both mornings with them being ironed on the Sunday morning prior to the competition.
Week commencing 29th June
With weather conditions similar to the previous week on the Tuesday we were able to replicate the work carried out on the previous Tuesday, this being a double verti-cut, cut, top dress and a roll using the vibrating rollers, the picture below shows the amount of Organic mater, seed heads and grass that is removed during the process of verti-cutting, this being the second trailer full.  If you click on the link Next to the picture it shows the verti-cut units in action. 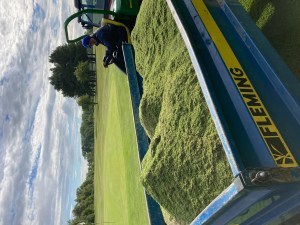 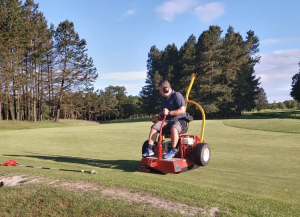 On Tuesday the greens were given a light dressing of sand 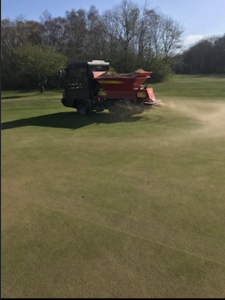 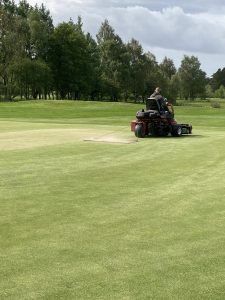 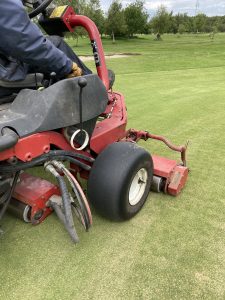 Following the drier spell and the top dressing on Tuesday we then had the irrigation system on the rest of the week watering the greens and the tees every night.
Week commencing 15th June
As I said in the last update the weather has become wetter and also a lot more humid, this has lead to a spurt in growth around the entire golf course the area of the course effected the worst was the fairways.  Combined with the fertiliser that was applied earlier in the year this has meant that we’ve had to spend more time this week mowing them to regain a better playing surface, with some of the fairways requiring up to 6 cuts over the 5 day period.  The change in weather had also lead to a outbreak of Fusarim on the greens, which is disease that attacks the turf, we sprayed the greens with a fungicide on Monday the 15th, the application has worked well and the greens are showing good signs of recovery.  Due to the growth spurt around the course we spent the rest of the week cutting all other playing surfaces such as the tees, aprons and semi rough.   The greens are mown every day this time of year unless severe weather conditions do not allow.  Moving of the pin positions were done on Wednesday and Friday and the bunkers were fully raked on Monday Wednesday and Friday and checked and raked where required on Tuesday and Thursday.  On Thursday the greens were verti cut. 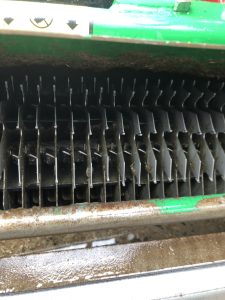 Above is a photo of a verti cutting unit, it shows how the cassette has a number of teeth which cut into the surface ‘sward’, we are currently cutting into the surface to a depth of 2mm, which means we are removing any dead grasses and organic matter which if not removed then the putting surface would become soft and spongy leading to unhealthy greens.  The units also remove grass from the surface helping to thin out the sward leading to a better putting surface.  We look to carry out this work once a fortnight when conditions allow, doing two passes across the greens each time.
Greenkeepers update 14th June 2020
Now that we’re getting back to some kind of normality its good to see so many faces back on the golf course, the weather seems to have a little more of a British summertime feel to it in recent weeks, which for the greenkeeping team has been welcomed following exceptionally dry months of April and May.
During those months we only had rainfall of 14mm, which meant the course suffered in areas where we were unable to get water on through the irrigation system.
As some will already be aware the irrigation system covers the tees and the greens, throughout this period the system was running for anywhere up to 10 hours over night/early morning, unfortunately this still wasn’t really enough water to keep the greens and tees looking green. following a treatment to the greens called Aquaduct and the much needed rainfall that we’ve seen at the start of June ‘over 40mm’, which is more than March April and May combined’, the greens have improved in appearance and the rest of the course has also benefitted from the rainfall and is looking refreshed. 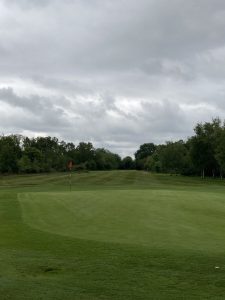 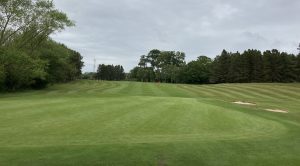 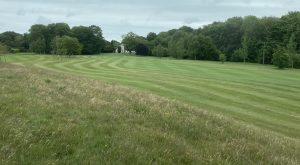 The greenkeeping team are now back up to 4 staff members and 1 volunteer who helps out a couple of days a week, meaning we are now able to carryout more jobs on the course rather than minimum requirements of just mowing the playing surfaces while we were down to 2 staff during the month of April and the 1st 2 weeks of May.
In the last few weeks the greens have been verti-cut on 3 occasions, they have been top dressed twice and have been mown on a daily basis, the aprons and surrounds have been mown 3 times per week as these areas have also had the benefit of being watered from the sprinklers around the greens.  Tee boxes however have only been mown once per week to allow them to recover from the dry spell.  Fairways and the semi rough areas have also all been mown on a weekly basis .  As said above the greens were treated with Aquaduct, this is a soil surfactant which helps to cure dry patch on the greens.  Dry patch occurs when the surface becomes dry and it then repels water, Aquaduct helps to move water through the surface enabling the root zone to regain moisture levels, promoting the recovery of the stressed turf.
We have carried out some more pruning, this time on the trees that run along the right hand side of the 18th fairway, this was done to enable the machinery to get closer to the trees and also a more favourable shot from what is a popular landing area.  Other low hanging branches near paths around the course have also been removed.
All the bunkers have been trimmed around and also the bunker faces have all been flymowed, as have the tee sides with all steps and yardage stones being strimmed around.  The golf club have also purchased new yardage discs which have been put out on the fairways.
Taking advantage of the wet weather we’ve over seeded and top dressed the areas in front of the 4th, 5th, 8th and the 13th greens so hopefully some improvement should be seen there.
Moving forward we shall be keeping in touch with the updates more regularly and we hope that everyone can enjoy the remainder of the golf season.
Thanks the Greenstaff
Green Speed Article
Attached is an interesting arcticle from February’s Greenkeeping publication explaining the key factors affecting green speeds
Green Speed_1_February2019
Green Speed_2_February2019
Pages: Page 1 Page 2